A vasovasostomy, also known as a vasectomy reversal, is a surgical procedure in which the vas deferens tubes are reconnected. Although a vasectomy is considered a permanent birth control option, you can choose to have it reversed in order to be fertile again.The procedure is done using general anesthesia or spinal anesthesia so that you do not move while the surgery takes place. Most facilities, such as urologist in St Petersburg, consider a vasectomy reversal an outpatient procedure, thus overnight hospitalization is not required.

The procedure itself can take anywhere from 2 to 4 hours, in addition to a couple more hours for the anesthesia to wear off. In cases where the vas deferens tubes and epididymis are blocked, the surgery may take longer.

Pain medication will be administered immediately after the procedure to take care of any pain or discomfort. Once your doctor approves it, you will be sent home the same day of the surgery. Most patients return to their regular activities 21 days after the vasectomy reversal.

Although the majority of people that undergo vasectomy reversal surgery are successful, the amount of time that has passed since the vasectomy can affect results. Doctors believe people have a greater chance of success if the vasovasostomy is performed within 10 years of the vasectomy. As time passes, problems such as blocked tubes or formation of antibodies to sperm are more likely to develop.

In most cases, vasectomy reversal surgery:

Some of the risks associated with vasectomy reversal surgery include:

Before Deciding on Vasectomy Reversal Surgery

Before opting for vasectomy in St Petersburg, your physician will need to determine whether you are fertile. This can be done with a before and after test that checks your semen for sperm antibodies. If there are antibodies present, the chances of pregnancy are low and an alternative method such as in vitro fertilization may be recommended. 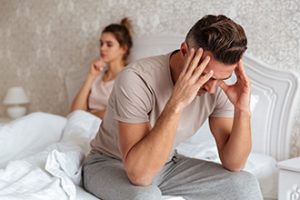 Erectile dysfunction is typically caused by an underlying problem. Some of the most common causes of ED include; arteriosclerosis, diabetes, medication, hormone disorders, and psychological problems. There are also other health conditions that can lead to impotence such as; neurologic problems, Peyronie’s disease, venous leak, injury, surgery, and exposure to radiation.Arteriosclerosis

Arteriosclerosis is a condition in which the arteries become narrow and harden. It can also restrict blood flow to different parts of the body and cause ED. About 55% of men with impotence due to arteriosclerosis are at least 60 years of age.

Factors that increase the risk of arteriosclerosis include:

Approximately 60% of men with diabetes mellitus suffer from erectile dysfunction. This is because increased levels of glucose in the blood cause damage to nerves and blood vessels in the body. As a consequence, blood flow is reduced and impulses of the nerve are impaired, preventing a successful erection.

More than 200 prescription drugs can cause ED as a side effect. These include drugs for hypertension, heart problems, depression, and sedation. Over-the-counter medication, alcohol abuse, and illegal drug use are also factors that contribute to impotence.

Hormone imbalances make up for less than 5% of erectile dysfunction cases. Low levels of testosterone in the body can cause decreased sex drive and lead to impotence. Testosterone deficiency can also be caused by an underlying health condition such as a pituitary gland tumor. In addition to low testosterone, renal and liver diseases are also possible factors of ED.

Psychological problems accounts for a big percentage of erectile dysfunction in younger men. However, both younger and older men can be affected by such conditions. Common psychological issues that lead to a low sex drive include; stress, anxiety, guilt, worry, and depression.