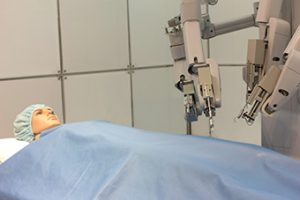 A certain type of prostate cancer treatment called Laparoscopic Radical Prostatectomy is widely becoming a viable option for the treatment of prostate cancer. Laparoscopic Radical Prostatectomy (LRP) is an invasive, keyhole surgery that seeks to remove both the prostate gland and the seminal vesicles in order to treat men who are suffering from this type of cancer.

The difference between LRP and the traditional prostate cancer treatment is the location of the incision. With earlier radical prostatectomies, a surgeon would make a single incision at the pubic bone that would extend to the belly button or the umbilicus. In contrast, LRP requires only five small incisions through which small tubes are inserted. Technology has made it possible for doctors to insert these specialized robotic-like instruments and telescopic cameras inside of the tubes in order to perform the surgery. The images are then displayed on a magnified television screen and the surgeon maneuvers the robotic arms in order to make the necessary changes. Performing surgery this way allows the surgeon to see exactly what is going on for a more exacting and precise procedure. This type of minimally invasive surgery is also called da Vinci surgery.

If a patient is deemed well suited for LRP surgery, the doctor will operate while the patient is under general anesthesia, meaning the patient will be asleep. Generally, the operation lasts for two to three hours. Many doctors suggest that the hospital recovery time is only one day to monitor the patient and make sure he is responding well to the surgery. This is different from a traditional prostatectomy, which demands that a patient remain in the hospital under close supervision for at least five days. After the patient is released from the hospital, doctor’s orders are that they must maintain a catheter which is passed through the urethra to allow for urination without getting infections. This catheter must remain in place for a period of one week. After one week, the patient is usually instructed to return to the doctor in order to determine if the area between the bladder and the urethra has healed. If the patient is able to pass urine without issue or complaint, he can go home and return for scheduled check-ups.

Aside from LRP being a less invasive surgery with minimal scarring, there are other advantages to this alternative treatment for prostate cancer. Many doctors cite that the advantages of this surgery include improved visualization, reduced post-operative pain, a much shorter hospital stay, reduced blood loss during surgery, and a quicker return to the patient’s normal routine. It also virtually eliminates the need for a blood transfusion. Following LRP surgery, many men have cited that they are able to maintain better urinary control and sexual performance.

To know more about this specific treatment contact us or set an appointment with one of our doctors.