Prostate cancer is the most common cancer in men and it’s estimated that 17% or one in six men will get this disease. Always start with the NCCN guidelines for patients or for physicians.

What and where is the Prostate Gland? 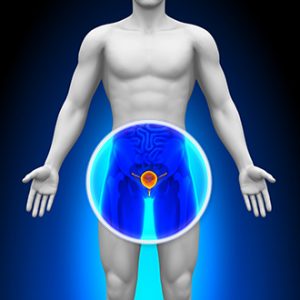 Why be concerned with Prostate Cancer?

Prostate Cancer is the second leading cause of cancer death of men in this country; it is second only to lung cancer. Prostate cancer claims the lives of more than 41,000 American males each year. It is the most common cancer in men in the United States.

Are there any high-risk groups?

The lifetime odds of developing prostate cancer are 1 in 6, a figure that is on the rise, particularly in African-American men and men with a father or brother who has had prostate cancer. Since prostate cancer is especially prevalent in men over age 65, the impact of the disease is expected to be even greater as the population ages. 99% of males diagnosed with prostate cancer that has not spread beyond the organ itself have at least five-year survival rates. 63% survive at least 10 years. Early detection is key to increased survival rates, but unfortunately, men avoid prostate exams, fearing that if cancer is detected they will face incontinence and or impotency as a result of treatment. Recent medical advances have made the likelihood of either of these consequences more remote.

How can I guard against Prostate Cancer?

The American Cancer Society recommends that annual digital rectal examination (DRE) and prostate specific antigen (PSA) blood test for men aged 50 years or older; African-American men, and men with family history of the disease should be screened annually, beginning at age 40. Statistics indicate that men who have either a father or brother with the disease are two to three times more likely to develop it themselves.

Are there warning signs?

Prostate cancer is an insidious disease, quietly progressing with few symptoms. Often, it is not found until it has spread. But, there are signs that indicate either BPH (a non-cancerous disease of the prostate) or prostate cancer may be present.

Warning signs of Prostate Cancer revolve around changes in Urination, including:

How is Prostate Cancer treated?

There are treatments for all patients with cancer of the prostate. The seriousness of the disease when it is first diagnosed provides a guideline for deciding which approach to employ.

Today, four different modalities are employed for treatment of prostate cancer-surgery to remove the cancer; radiation therapy (including brachytherapy, in which radioactive seeds are “planted” in the cancer to kill the cancer cells); cryosurgery (freezing the cancer cells to kill them); and hormonal therapy. Treatment is, of course, tailored to the individual patient and one mode or combination may be used. A major concern often expressed by prostate cancer patients is impotence because until recently, impotence was almost always a by-product of surgical treatment. But new techniques have made the occurrence of impotence much less likely. In consultation with his doctor, the patient has a wide choice in choosing the treatment that makes him most comfortable. But, whatever treatment is chosen, the most critical aspect is still early detection.

What are the chances of surviving Prostate Cancer?

The outlook for treating prostate cancer is favorable. Since the median age at diagnosis is 70 years, many patients, especially those with localized tumors, may die of other illness without having suffered significant disability from their cancer. Treatment in younger men is more aggressive, in part because it is thought that the nature of the disease may be biologically different from that found in older patients.

Are there groups or individuals that offer information and support to people with Prostate Cancer?

The primary source of support is from family members and friends. Understanding from a spouse or someone else close to you can be key in building morale. Sharing experiences with other men who have been diagnosed and treated with prostate cancer is also extremely helpful.

You can contact our doctors and schedule an appointment if you want to know more about your options.