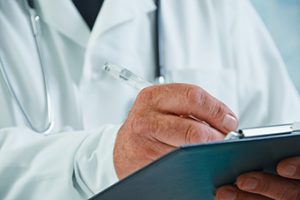 When a penis is erect, it may curve naturally, not causing any problems. However, when such a curve results in difficulty and pain during intercourse, it may occur because plaque or scar develops within the penis and that condition is known as Peyronie’s disease.

Since no one knows for sure why this condition develops, the listing below contains only possible causes. We do know one thing for sure – Peyronie’s disease is not caused by sexually transmitted diseases or cancer.

Without a complete evaluation, determining a treatment for such a condition is impossible, therefore, the first step is to see your physician. If possible, he/she will be able to identify the location, size and hardness of the plaque. Be prepared to tell him exactly what your symptoms are and when they first began.

Since this disorder sometimes resolves itself without medical intervention, a conservative waiting period should be enforced before more invasive treatment is begun. This should include relieving pain and straightening the penis enough to allow intercourse. If the plaque gets progressively worse over this period of time, as it sometimes does, then another course of action will be taken. As of yet, there is no single effective treatment, but rather a combination of treatments tailored for the individual that is most successful. Consult your physician for the best options, which may include:

Medications – There are various types of medications that have proven effective to soften and reduce the size of the plaque. Some are taken orally while others are used locally. As with any medication, there may be side effects, which your physician will discuss with you.

Surgery – Used only in severe cases when medication has not proven to be successful. This may involve removal of the plaque while replacing the tissue with a graft; shortening the penis slightly on one side to straighten the curve or using prosthesis to lessen the curve and add rigidity to the penis.